The new UK variant has been found in Colorado, California, Florida, New York, Georgia, and Pennsylvania. None of the patients had travelled except the PA case, which means most of them caught it from someone else in their community. How much community spread is still largely unknown at this time. What we do know is that as a country, we are only checking 3,000 samples a day for their genetic signatures. The only way to know if we are dealing with the UK variant or the existing strains is by genetic testing. We are testing roughly 1.3 percent of all PCR swabs submitted to large labs.

If we just run the numbers, we can make a rough guess of how quickly it will spread. Over the past week, we’ve detected 6 cases with the new variant. 6 cases at a 1.3% testing rate means that we have at least 461 cases in the US. The true number of cases of the UK strain is likely higher, but 461 is a starting reference point. Some of those 461 people with the new strain will spread it to others at a rate 56% higher than before. We have until March to prepare and get as many people vaccinated as possible.

UK Strain Ramifications for the US

by Wei-Shin Lai, MD, Co-Founder and CEO of SleepPhones®, background in epidemiology
December 23, 2020

The new UK coronavirus strain (VUI202012/01) is in the US, but we don’t know what percentage of cases are with the new strain. It’s fairly new, so probably not a lot yet. Some people say there are hundreds of cases in the US with the new strain. It spreads much more easily, so the current restrictions aren’t going to be enough, especially since we don’t even have the current strain under good control with the current restrictions. We don’t know if it spreads more easily because fewer virus particles need to enter a body to cause infection, if it stays alive on surfaces easier, if it stays alive in the air longer, or if a person who has it produces more viruses when they cough/talk/breath. Once we know exactly why it spreads more easily, then we can decide if we need to space further apart, clean surfaces more, have more clean air exchange, or double down on testing, contact tracing, and quarantining.

Here are my answers to the common questions that people are asking.

Will the Vaccine Work Against It?

Most likely. They are doing tests with serum from people who were vaccinated, and we should have a definitive answer shortly after New Year’s Day with the percent effectiveness. There are 9 mutations from the original strain on the spike protein, including one at the receptor binding site. If I have to guess, I’d say that the effectiveness of the vaccine may decrease from 95% to 92% with those mutations. So it’s really negligible — the vaccine still works.

Is the New Strain More Deadly?

What Does This Mean for Our Day-to-Day Life?

We have to continue what we are doing and then do even more in March 2021. Mask wearing rates have to increase. Fewer gatherings. Smaller gatherings. Clean more. Sanitize hands ridiculously. Consider spraying alcohol on frozen and refrigerated items coming back from the store. Travel less. No airplane travel. That sort of thing. All of the things we already know could be done but don’t do consistently. Not just us, but everyone around us, since they transmit to us. Even then, it may still be hard to contain if schools and sports start back up after the holidays. My guess is that the new strain may precipitate a wave in about 2–3 months. We aren’t closing our borders to UK people, so we’ll get a lot of seeding with the new strain. The so-called Tier 4 stay-at-home restrictions in the UK are honestly laughable. It’s the swiss cheese of containment strategies.

How Does This Fit Into the Bigger Pandemic Picture?

This is bad. I’m worried. When I first heard about it and saw that countries were restricting travel from the UK, I knew it was serious. Then I finally found a scientific article about it, and it confirmed my fears and raised others. Some people are downplaying it, saying that it’s not more deadly. Sure, no one is saying it’s more deadly. That’s missing the point. This is not a disease process problem. This is an epidemiological problem. More people are going to catch it than previously predicted. More people are going to die than previously projected. Hospitals will be far more overwhelmed than they already are. We will have to do more. It really does “change” things from a broader perspective.

I was researching the increase in transmission, and my kid was sitting next to me. (We are homeschooling this year.) So we ran the numbers. Each line is a week. On week 2, we introduced the mutation in red that causes the increase in infectivity. We are assuming that the strain is 70% more transmissible. Epidemiologists currently estimate 50–70%, so it may not be quite as bad as the chart below. By week 5, the new strain has already overtaken the old strain. The purple in week 6 is just my kid deciding that there’s another strain that is 100% more contagious. 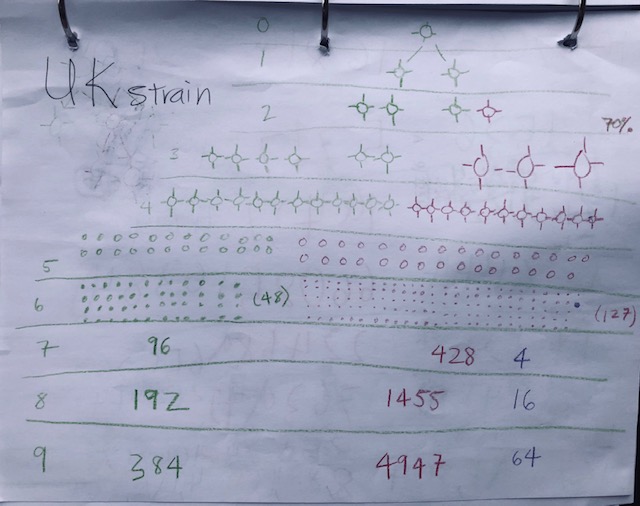 Here is the percentage of the new variant (the new strain) in the tested viruses. This chart is from the EU report dated 12/20/2020. The blue line shows how the new strain is outcompeting older strains very rapidly. 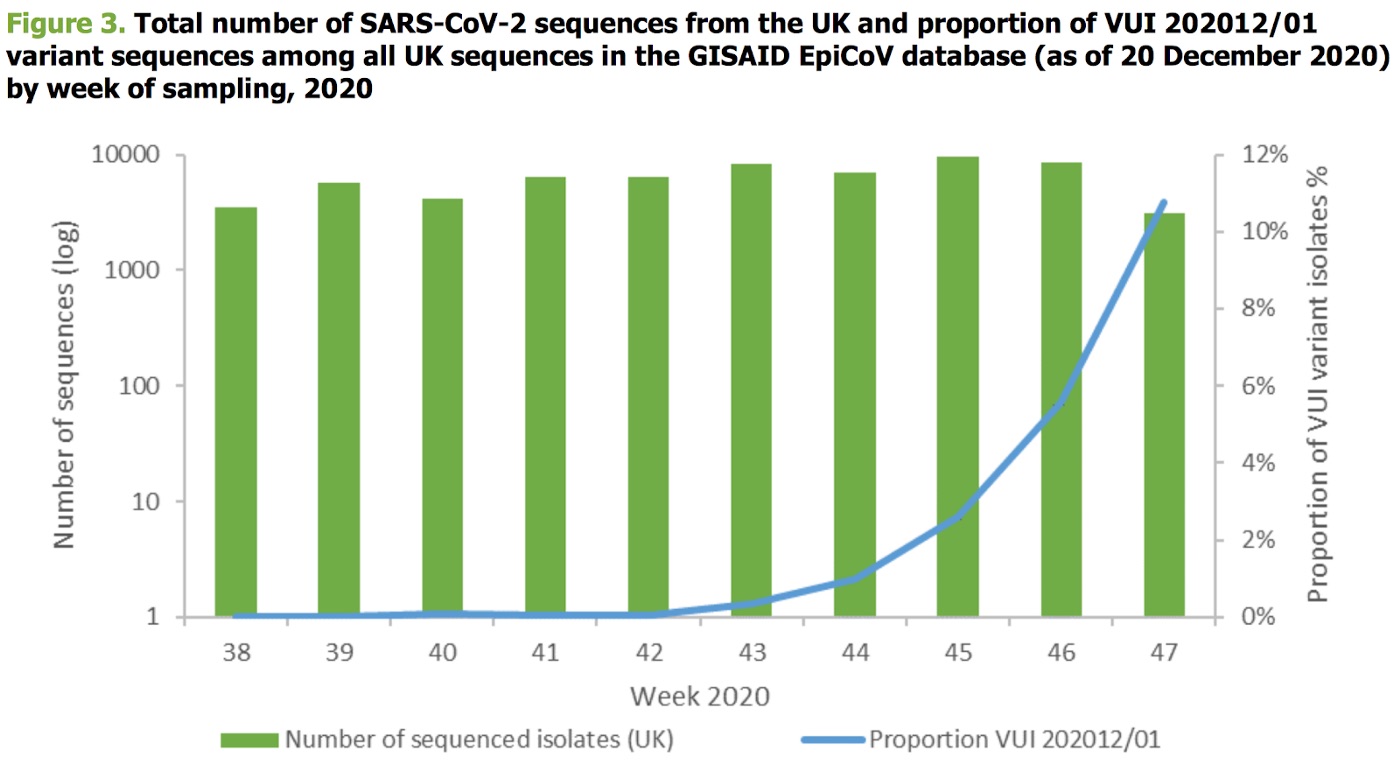 Some people said that it may be an unfortunate set of superspreader events. The phylogenetic tree proves that it’s not just bad luck with the particular strain. It does indeed spread faster, and it’s continuing to mutate. 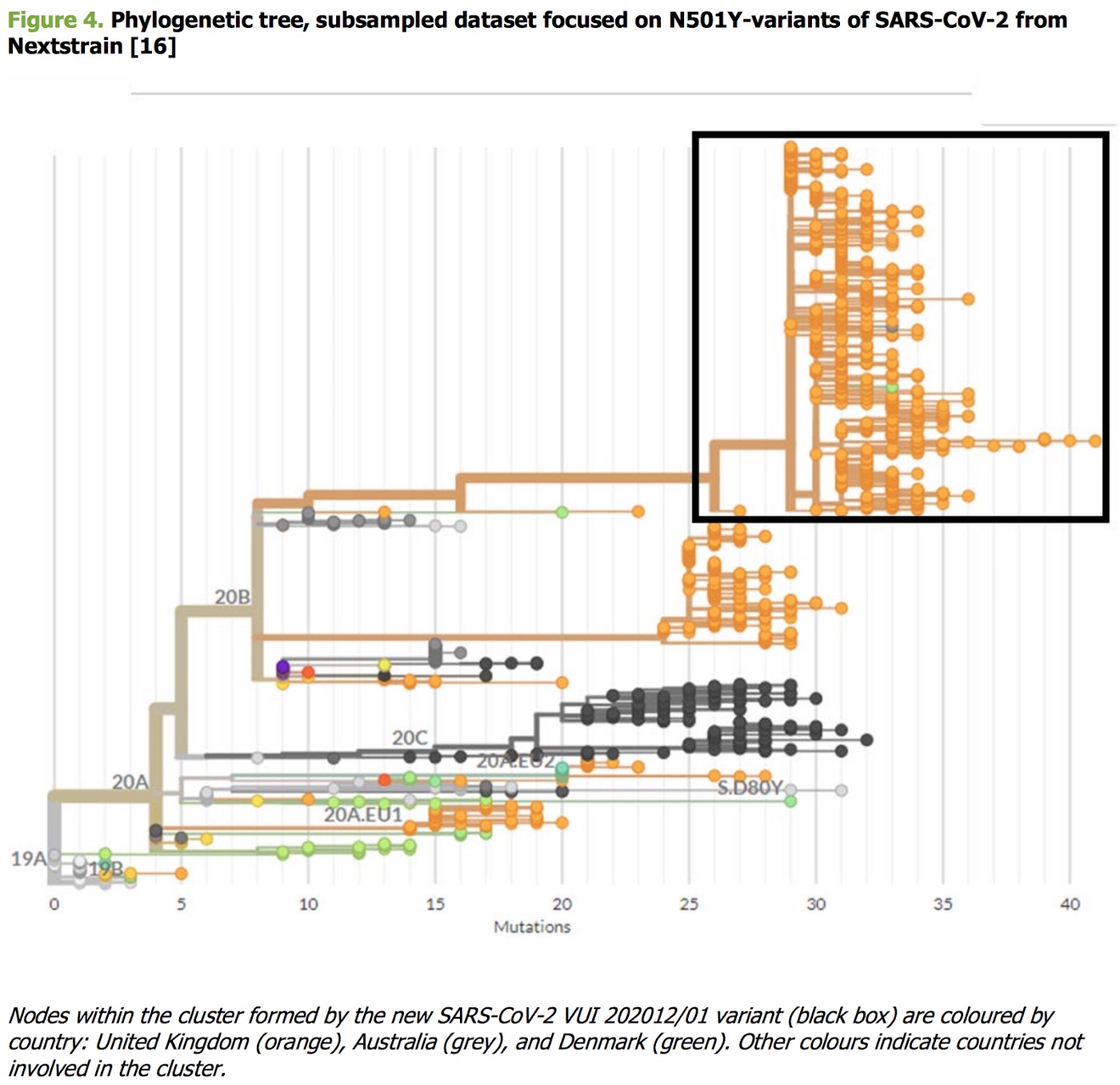 Theories of How The UK Strain Came About

The theories about how this strain started can be predicted by science, but it still feels rather sci-fi to me. Here is the excerpt from the EU article.

One possible explanation for the emergence of the variant is prolonged SARS-CoV-2 infection in a single patient, potentially with reduced immunocompetence, similar to what has previously been described [17,18]. Such prolonged infection can lead to accumulation of immune escape mutations at an elevated rate.

Another possible explanation could be adaptation processes in a virus that occur in a different susceptible animal species and is then transmitted back to humans from the animal hosts. This led to the emergence of a variant with multiple spike protein mutations (including RBD mutation Y453F and deletion 69-70) in Denmark during transmission among mink [19]. Several different spike protein mutations associated with mink have also been described in the Netherlands [20]. The UK has reported to ECDC and the WHO Regional Office for Europe that there is no clear epidemiological link to animals for VUI 202012/01, so this explanation is less likely for this variant [1].

Lastly, it is also possible that the variant has emerged through circulation in countries with no or very low sequencing coverage. This hypothesis is less plausible, however, as random mutations acquired during circulation of the virus would not explain the unusually high proportion of spike protein mutations, and undetected circulation for a long enough time for the high number of mutations to accumulate (around 10 months according to current molecular clock estimates) is also not very likely due to global travel patterns.

The Danger of Spread in Wild Animal Populations

Theory number two is about animal hosts. This brings up the recent report about a wild mink in Utah testing positive. The detection was near a mink farm, and minks catch SARS-CoV-2 and get sick just like humans. This shows that some farmed minks caught the virus from a human and then pass it on to the wild animals around the farm. I don’t think that we happened to trap the only wild infected mink. The virus is now circulating in wild minks and other mustelids for sure, a natural wild animal reservoir that will spin new strains back to humans on a regular basis. The Danish mink outbreak proves that minks can spread the virus back to humans, unlike dogs and cats. Our scientists will be fighting this for a long time. We’ll be getting yearly booster shots just trying to keep up as this virus evolves over time.

When we let this virus infect a lot of people — or animals — we are letting the virus organism make lots of copies of itself, some of which will mutate. Viruses play the “survival of the fittest” game too. The more competitive (i.e., contagious) strain wins and dominates the world. The only way to limit the number of mutations that could strengthen the virus is to limit the number of viruses. That means not catching it. Don’t catch it. Don’t spread it. Prepare for staying home more.

You can find more coronavirus updates and inferences on the SleepPhones blog and Dr. Wei-Shin Lai’s Medium.