Sleep Statistics: The State of Sleep in America

At SleepPhones®, we certainly talk a lot about sleep on our website, or when we're featured in local, regional and national media, and when we exhibit at tradeshows like CES. 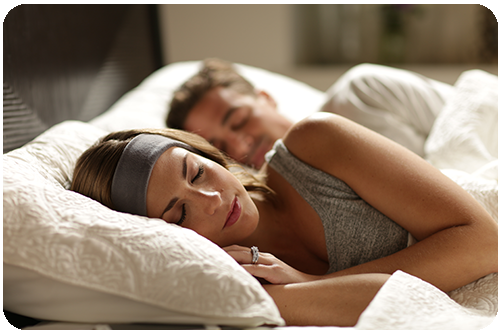 It's no wonder— our flagship product was originally invented by a family doctor for the simple and monumental reason of helping her get back to sleep comfortably after late night patient calls. She needed better, more comfortable headphones... so she and her video-game-developing husband invented them.

But what IS the state of sleep in America? What do sleep statistics tell us about a national challenge like sleep? We've tried to aggregate recent national sleep statistics here. Take a moment to review these facts and studies on sleep, and you'll see why SleepPhones were invented at just the right time!

"Sleep is the most under-appreciated health crisis in America," states Dr. Mehmet Oz, host of "The Dr. Oz Show", who helped commission the largest consumer sleep study in conjunction with ResMed.

Together, Dr. Oz and ResMed gathered sleep statistics from 20,000 people and a collective 1.53 million nights' worth of sleep. What did they find? Well, to put it lightly, sleep is chronically neglected by the vast majority of Americans.

According to the sleep statistics, a whopping 79% of Americans are getting less than the recommended seven to eight hours of sleep each night, and over 30% have a SleepScore of 55 or less. What's a SleepScore, you ask? It's a new statistic developed after analyzing the data gathered from the Dr. Oz and ResMed study.

The average American SleepScore is 77 out of 100. The score is based on a variety of factors, including:

Anyone can receive their own SleepScore by taking the survey here. Colin Lawlor, CEO of SleepScore Labs, states: "This is the largest objective consumer sleep study ever evaluated, giving us the tools to make a real impact on sleep deprivation."

Sleep Statistics: What Facts On Sleep Reveal About Us

Here are some further sleep statistics gleaned from this study:

With this study of sleep statistics being released at CES in January 2017, it is the most up-to-date information available about the state of sleep in America. With that being said, it is not the end-all be-all when it comes to studies on sleep. Here is a look at other studies on sleep released in 2017.

Published in January 2017, a study commissioned by the University of Washington Health Sciences concluded chronic sleep deprivation suppresses the immune system. In other words, people get sick more often when they don’t get enough sleep.

From the study, here is one of the most critical facts on sleep reported by Dr. Nathaniel Watson, co-director of the UW Medicine Sleep Center at Harborview Medical Center: "What we show is that the immune system functions best when it gets enough sleep. Seven or more hours of sleep is recommended for optimal health."

What is Sleep Debt and Can I Make up for Lost Sleep?

A study published in early 2017 by the University of Calgary suggests that it's possible to "bank sleep" ahead of periods of expected sleep deprivation. Guillaume Millet, PhD, and Pierrick Arnal, PhD, have discovered that "storing sleep" before a period of sleep deprivation improves physical performance and cognitive function.

According to the study, sleeping two or more hours each night beyond the recommended minimum (10 hours instead of 8 hours) can benefit the chronically sleep deprived. To that end, the study also suggests it's possible to catch up on "sleep debt" by sleeping extra hours following a period of sleep deprivation.

The study does not discount the facts on sleep deprivation, such as the harmful effects that come with not getting enough sleep on a regular basis. Although it is one of the more interesting recent studies on sleep in the sense that it presents unique ideas on challenging the status quo by stockpiling sleep and/or catching up on sleep debt.

Common Issues With Getting Quality Sleep

Taking too long to fall asleep

SleepPhones® help you introduce soothing music, guided meditation, sleep apps and more to your nighttime routine with wearable, comfortable audio headphones inside a soft headband— a core design feature that sets them apart from traditional clunky over the ear headphones or earbuds that are uncomfortable or fall out. Some of our past articles have talked about how you can use SleepPhones® to get to sleep faster and stay asleep longer:

Nearly every article on sleep statistics will tell you that getting more exercise has a positive correlation with getting more sleep. Besides a personal trainer, one of the greatest workout motivators you can have is your favorite music by your side.

So whether or not you already have a pair, or you're looking to upgrade to something new, RunPhones® can be your 2-in-1 solution--just as our traditional SleepPhones® are often used by our customers well beyond the bedroom for travel, work and leisure activities. They come in wired and wireless models so you can choose what's best for you.

What Do You Think About the State of Sleep in America?

Did these sleep statistics shine some light on how chronically sleep deprived the United States is as a country? Did any of this remind you of YOU? Let us know your thoughts about the state of sleep in America by heading over to SleepPhones® Facebook or Twitter pages!