Over 60 percent of people suffer from poor sleep. Generally, one night of restlessness won’t have long-term consequences, but consistently poor shuteye can lead to significant mental and physical conditions such as heart disease, high blood pressure, depression, and anxiety.

Rather than turning to medication, people are exploring how music and sound can address their barriers to sleep. It’s important to note that this strategy isn’t just a fad, either. Ancient civilizations strongly believed in the power of music and used it for healing rituals.

However, it’s essential to discuss the option of music therapy and sound healing with your doctor before experimenting. While alternative treatments for sleep disorders may be helpful to some people, it’s important to ensure it’s right for you.

What Is Sound Therapy?

Sound therapy is an overarching term that refers to sensory treatments that use music and sound as therapeutic tools. Traditional sound therapy often includes instruments such as singing/sound bowls, gongs, chimes, and a relaxing voice.

However, depending on the goal of the listener and the practitioner, modern sound healing therapy may include a variety of sounds including:

Some researchers believe sound healing can be traced back over 40,000 years to aboriginal tribes in Australia and others point its origins to ancient Tibet.

Many cultures believe in music's healing abilities. Chanting, drumming, and singing are key elements of Native American and African healing ceremonies. The Peruvian Wacheripi tribe uses unique songs for different afflictions such as snake bites, headaches, and fevers. Grecians appealed to the gods through music to end conflicts and plagues.

While music has ancient roots, the formal study of music’s impacts on health only dates back to the 19th century. In the 1880s, a Parisian researcher named Diogel set out to discover whether or not patients who listened to live musicians could glean any health benefits. His findings showed that music could lower blood pressure, decrease heart rate, and calm the nervous system.

But as we gained more knowledge of disease prevention, invented better medical tools, and discovered vaccines, the scientific discoveries of the post-industrial revolution pushed music aided-healing aside. However, as more is known as to the potential side effects of sleep medications, people are finding themselves returning to more holistic treatments and therapies. With today’s advances in headphone technology and science-driven sleep sounds, it’s easier than ever to explore the power of sound healing and music therapy.

How Does Sound Therapy Work?

Listening to pleasing music and sounds can release dopamine and serotonin, two neurotransmitters that are important for mood regulation, focus, and of course, sleep. There is also another school of thought that points to a phenomenon called brainwave entrainment.

Brainwave entrainment, also referred to as brainwave synchronization, is a method of stimulating the brain with sound (light and electromagnets can also be used). The goal behind entrainment/synchronization is to align one’s brain waves with brain-state frequencies associated with relaxation, happiness, and sleep.

New-age claims of sound healing’s effect on the body’s “energy” don’t quite hold up to peer review, although science has highlighted a variety of benefits that are research-based. For instance, a recent study published in PLoS One found that subjects who listened to relaxing music before a stress test not only performed better, but also recovered faster than those who listened to sounds of “rippling water” and those with no acoustic stimulation.

Another 2016 study published in the Journal of Evidence-Based Integrative Medicine suggested that sound meditation by way of a singing bowl can profoundly reduce tension, anger, anxiety, and depression, while also boosting feelings of spiritual-well being.

While more research is still needed to determine the exact mechanisms behind sound therapy, those who use it report:

How to Use Sound Healing for Sleep

Listening to music and healing sounds can help you address issues that impact sleep quality, such as anxiety, insomnia, and pain. Try incorporating it into your sleep routine by: 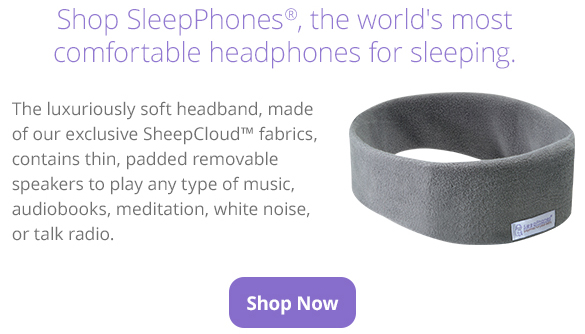 For millennia, music and sound has been used across different cultures for healing. That impact remains as relevant today as it was then. If you’re ready to try sound therapy for yourself, consider using the world’s most comfortable headphone for sleeping, SleepPhones® headphones.

Visit our blog or use the links below for information and articles related to sound healing and sleep.

Check Out Additional Pages from SleepPhones

SleepPhones®, RunPhones® and our entire family of products mean something different for all kinds of people, and are used in all kinds of ways. Visit our individual community pages below to learn more!

"I wanted to give a huge thank you to SleepPhones®. I received my wireless SleepPhones® in time for surgery. I suffer from PTSD and panic attacks and this amazing device allowed me to sleep calmly days before surgery, without the need for heavy medications! I believe my healing process is aided by better sleep, emotional rest and overall mental health due to your product. Pajamas for your ears - better yet, the healthiest pair of pajamas I've ever owned!"