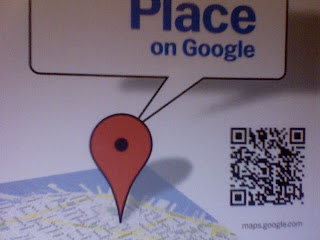 Google sent us an envelope today. Apparently we're a favorite place on Google! We have our own QR code now.

Unfortunately, that directs the customer to our basement, which is not open to the public. Here's the code for our website instead.

Okay. If you're like me, you're wondering what a QR code is. It stands for Quick Response and is also called a 2D bar code. It works like a bar code, but it can encode 7,089 numbers as opposed to 12 numbers in a standard UPC. It was developed in Japan and so can also encode Kanji, in addition to binary, letters, some symbols, and numbers. It's routinely used in Japan as a replacement for the UPC. An application on my iPhone is able to read it in real-time and take me to the specified webpage. Rock bands and some cutting edge businesses use it as a marketing ploy. Hmm... I wonder what we can do with it.