I think I'll start calling SleepPhones by version types now. We have had a number of upgrades over time. This will help everyone keep better track of stuff. Currently, we are selling what's left of Version 1.0 on Amazon. We are selling Version 2.0 on eBay. And Version 3.0 is on SleepPhones.com.

This is our prototype, hence Version 0.3. It had a nice fuzzy fleece, but it was too hard to work with. Plus, it didn't come in our core colors: lavender and gray. The wire was also too thick. I think we bought the wire from RadioShack.

This is our Version 1.0 SleepPhones. I made all of them in 2007. Then I had some employees make some in 2008. We bought the fabric for this version from JoAnn Fabrics. We would buy out the entire stock of lavender from the store or from online sometimes when it went on sale. In the picture, I am wearing a special edition red one for February. The wire is in the front coming out of an eyelet. Version 1.0 had a cute sheep eyelet. But then the eyelet company stopped making the sheep and refused to make us custom eyelets. We had bought bought out all of their sheep eyelets apparently. So Version 1.1 had just a plain eyelet. The left speaker is fixed in place, and the right speaker is adjustable by pulling on little strings affixed outside with a bead. 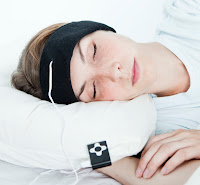 Version 2.0 was primarily made by our employees, though I did make quite a few. It's actually a better product with an interesting design that made it possible to remove the speakers in order to wash the headband. Plus it uses recycled Polartec® fleece and improved speakers. The only problem with it is that it was complicated to remove and replace the speakers. This version didn't last too long because we soon came up with the next version.

For some reason, people didn't like the wire coming out the front. It was always so confusing for people, even though we had many pictures everywhere of the wire coming out the front. And it was in the written instructions. We figured that the wire being in the front was better ergonomically for sleeping. But we had so many confused customers that we decided we'd make the wire in the back for Version 3.0. We also added Velcro. The speakers remain removable for washing.