A Look at Food Allergies: It's More Common Than You Think (Part 2/4)

The Most Common Causes and the Wide Range of Symptoms

Anaphylaxis may occur in about 13% of suspected food allergies. There are moderate food allergy cases where people know what causes problem, but the symptoms remain stable with each exposure. The symptoms are not life-threatening, like hives. Most cases are mild, and some people may not even know it's due to a food allergy.

In my practice, there was a family that had a strong history of asthma, allergies, and eczema (the allergic triad). I had fixed the father's asthma when he brought in his kids to see me. The kids knew they were allergic to milk and eggs from testing at the Allergist's office. They were being tested to confirm pollen and pet allergies. But they didn't realize that their dry, itchy skin rash (eczema) was related to the food. They had been using strong skin steroid creams from a Dermatologist. But that's not good for their skin or in general for the long term. So I told them that the eczema might be caused by the food allergy. They stopped eating those foods, and their eczema improved dramatically. (This is one reason why I love family medicine — I get to treat the entire patient, not just a small portion of their problems. And often I can do it more naturally.)

My own son had a couple of patches of eczema on his hand and arm that were hard to control with ointments and hydrocortisone. I thought it was just due to a dry winter, but then it continued through the spring, and it was starting to get worse. When I traveled overseas for 2 weeks and stopped cooking him eggs for breakfast, the eczema improved significantly. I thought eggs were a pretty good breakfast food until we figured out that they were causing his skin rash. 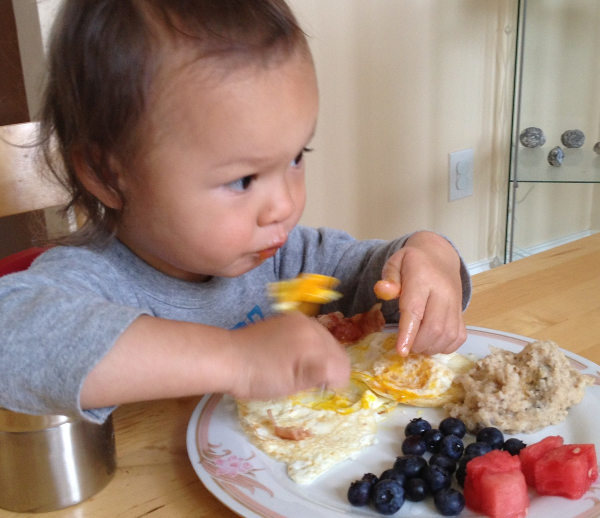 In these cases, there was a skin symptom from the food allergy, but it was mild enough that it was just not obvious.

Ever since college, I've been allergic to soy. Prior to that, I ate some type of soy product more than once a week. But one day, I became sensitize to it, and started to feel like my tongue and lips felt funny when I drank soy milk. After about a week of not feeling well every time I had soy, I stopped. I've tried tofu 3-4 times since then, and each time, I would get hives (large patches of raised, red, very itchy skin) for the next 24 hours, which improves by taking Claritin (an antihistamine that's weaker than Benedryl, but non-drowsy). I'm fine with soy sauce, probably because there's very little soy protein in soy sauce.

I consider that a moderate reaction. I supposed if I ate a whole plateful of tofu, my symptoms would be much worse.

I have a friend who recently developed allergies to soy, wheat, and sesame. He's vegetarian too, so they are being extra creative in meal planning. He gets pretty bad hives that last a few days when he eats those things. But he had lived with the hives for months before he went to the allergist and figured out what was going on. Thankfully, he never developed anaphylaxis during that time. Hives definitely indicate a stronger and more immediate reaction. If the symptoms are stable, then that's good. But if the symptoms worsen quickly over time, then you must be much more careful.

My health clinic provides routine allergy shots for people who have allergies. While the goal of the shots is to prevent anaphylaxis, they have a chance of actually causing anaphylaxis. Therefore, we enforce the 20-minute waiting rule after they receive their shot. Every now and then, we'll have someone who doesn't feel well after the shot. Most of the time, it's nothing. But we have had to give Epinephrine a few times out of precaution and transported the patients to the hospital for extended observation.

Anaphylaxis doesn't happen often with food allergies, and to die from it is very rare. But some people are extremely allergic, and for them, it's usually known because they've had serious and worsening reactions before. Deadly allergic reactions don't just come out of nowhere. EpiPens cost about $300 at retail price, expire in a year, and can't be kept in a hot car. Natalie Giorgi's parents had 2 EpiPens with them, so they must have been aware of her severe allergies. It's because of those cases that some airlines stopped serving peanuts, and schools are being extra cautious with tracking these allergies. It's imperative that precautions are observed with the highly allergic kids, which almost always involves peanut and tree nut allergies.

Angioedema is another allergic reaction that refers to swelling of the throat, tongue, lips, and eyes. Most of the symptoms seem to be in the head and neck. It can be just as deadly because enough swelling of the throat can cause it to close off the airway completely. I hear about it with shellfish allergies the most.