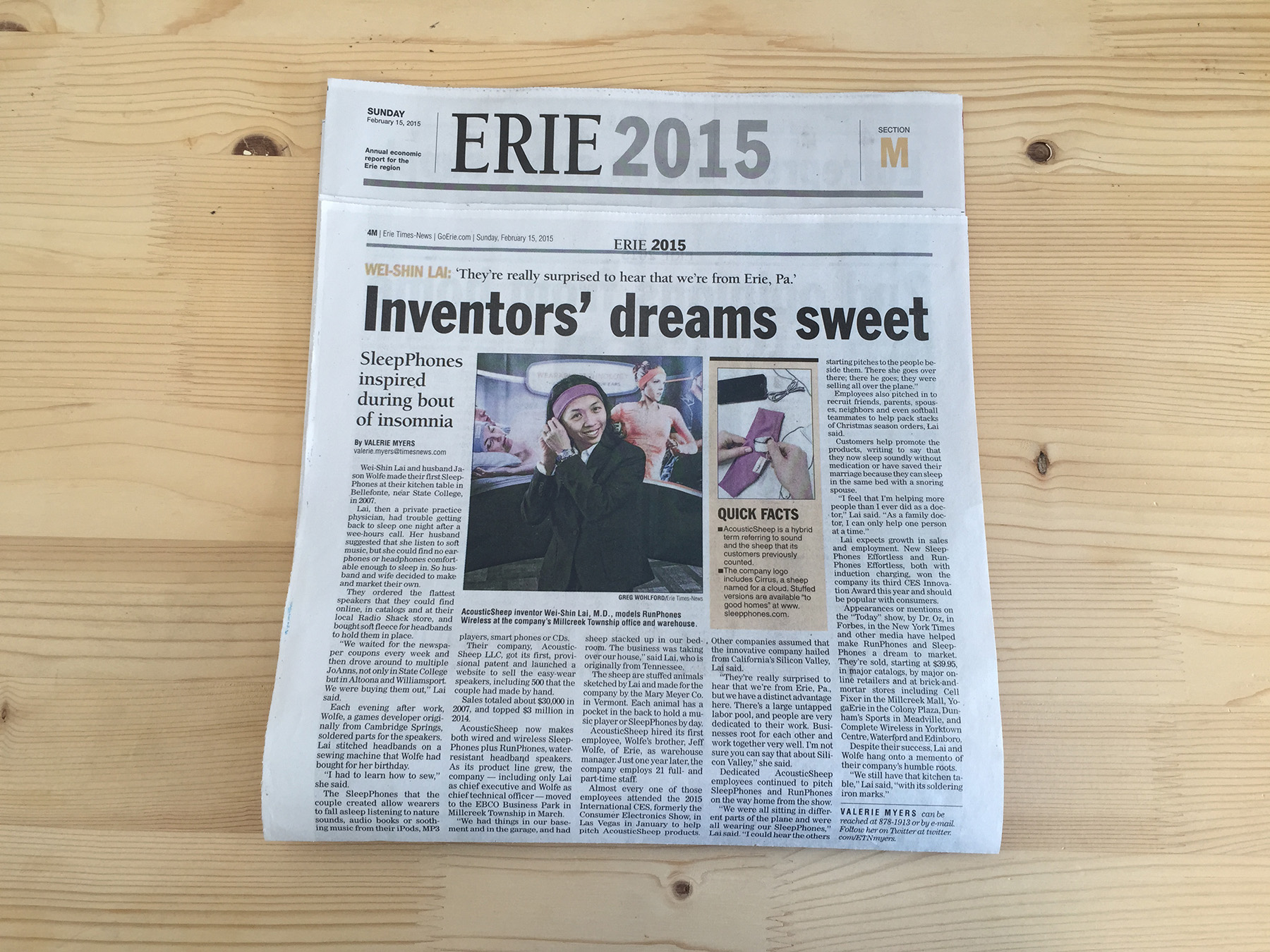 Wei-Shin Lai and husband Jason Wolfe made their first SleepPhones at their kitchen table in Bellefonte, near State College, in 2007.

Lai, then a private practice physician, had trouble getting back to sleep one night after a wee-hours call. Her husband suggested that she listen to soft music, but she could find no earphones or headphones comfortable enough to sleep in. So husband and wife decided to make and market their own.

They ordered the flattest speakers that they could find online, in catalogs and at their local Radio Shack store, and bought soft fleece for headbands to hold them in place.

"We waited for the newspaper coupons every week and then drove around to multiple JoAnns, not only in State College but in Altoona and Williamsport. We were buying them out," Lai said.

Each evening after work, Wolfe, a games developer originally from Cambridge Springs, soldered parts for the speakers. Lai stitched headbands on a sewing machine that Wolfe had bought for her birthday.

The SleepPhones that the couple created allow wearers to fall asleep listening to nature sounds, audio books or soothing music from their iPods, MP3 players, smart phones or CDs.

Their company, AcousticSheep LLC, got its first, provisional patent and launched a website to sell the easy-wear speakers, including 500 that the couple had made by hand.

AcousticSheep now makes both wired and wireless SleepPhones plus RunPhones, water-resistant headband speakers. As its product line grew, the company — including only Lai as chief executive and Wolfe as chief technical officer — moved to the EBCO Business Park in Millcreek Township in March.

"We had things in our basement and in the garage, and had sheep stacked up in our bedroom. The business was taking over our house," said Lai, who is originally from Tennessee.

The sheep are stuffed animals sketched by Lai and made for the company by the Mary Meyer Co. in Vermont. Each animal has a pocket in the back to hold a music player or SleepPhones by day.

Almost every one of those employees attended the 2015 International CES, formerly the Consumer Electronics Show, in Las Vegas in January to help pitch AcousticSheep products. Other companies assumed that the innovative company hailed from California's Silicon Valley, Lai said.

"They're really surprised to hear that we're from Erie, Pa., but we have a distinct advantage here. There's a large untapped labor pool, and people are very dedicated to their work. Businesses root for each other and work together very well. I'm not sure you can say that about Silicon Valley," she said.

Dedicated AcousticSheep employees continued to pitch SleepPhones and RunPhones on the way home from the show.

"We were all sitting in different parts of the plane and were all wearing our SleepPhones," Lai said. "I could hear the others starting pitches to the people beside them. There she goes over there; there he goes; they were selling all over the plane."

Customers help promote the products, writing to say that they now sleep soundly without medication or have saved their marriage because they can sleep in the same bed with a snoring spouse.

"I feel that I'm helping more people than I ever did as a doctor," Lai said. "As a family doctor, I can only help one person at a time."

Lai expects growth in sales and employment. New SleepPhones Effortless and RunPhones Effortless, both with induction charging, won the company its third CES Innovation Award this year and should be popular with consumers.

Appearances or mentions on the "Today" show, by Dr. Oz, in Forbes, in the New York Times and other media have helped make RunPhones and SleepPhones a dream to market. They're sold, starting at $39.95, in major catalogs, by major online retailers and at brick-and-mortar stores including Cell Fixer in the Millcreek Mall, YogaErie in the Colony Plaza, Dunham's Sports in Meadville, and Complete Wireless in Yorktown Centre, Waterford and downtown Edinboro.

Despite their success, Lai and Wolfe hang onto a memento of their company's humble roots.

"We still have that kitchen table," Lai said, "with its soldering iron marks."