The Erie Reader is the local voice for news, arts and culture in Erie, PA. 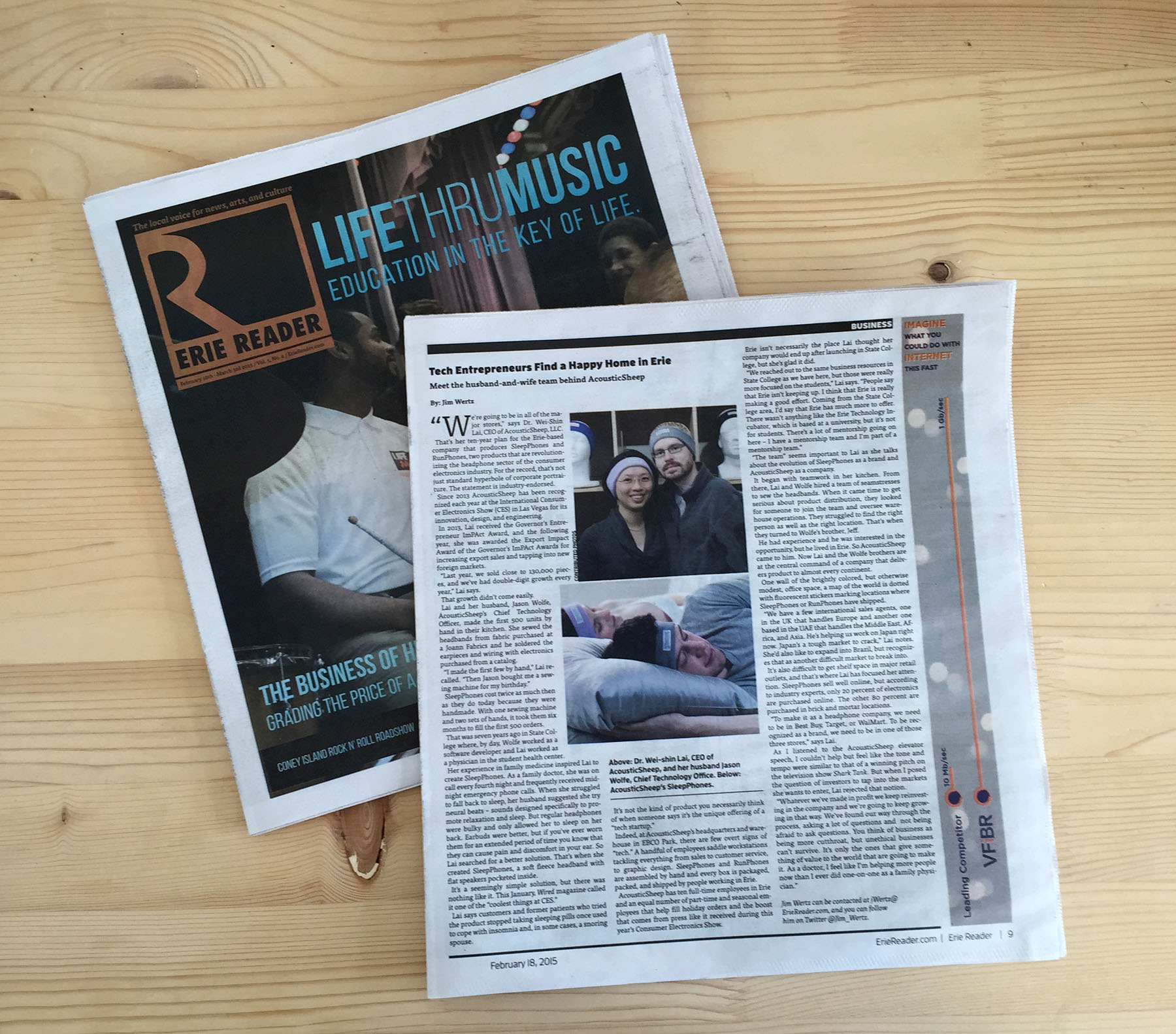 We're going to be in all of the major stores," says Dr. Wei-Shin Lai, CEO of AcousticSheep, LLC.

That's her ten-year plan for the Erie-based company that produces SleepPhones and RunPhones, two products that are revolutionizing the headphone sector of the consumer electronics industry. For the record, that's not just standard hyperbole of corporate portraiture. The statement is industry-endorsed.

Since 2013, AcousticSheep has been recognized each year at the International Consumer Electronics Show (CES) in Las Vegas for its innovation, design, and engineering.

In 2013, Lai received the Governor's Entrepreneur ImPAct Award, and the following year, she was awarded the Export Impact Award of the Governor’s ImPAct Awards for increasing export sales and tapping into new foreign markets.

Lai and her husband, Jason Wolfe, AcousticSheep's Chief Technology Officer, made the first 500 units by hand in their kitchen. She sewed the headbands from fabric purchased at a Joann Fabrics and he soldered the earpieces and wiring with electronics purchased from a catalog.

"I made the first few by hand," Lai recalled. "Then Jason bought me a sewing machine for my birthday."

SleepPhones cost twice as much then as they do today because they were handmade. With one sewing machine and two sets of hands, it took them six months to fill the first 500 orders.

That was seven years ago in State College where, by day, Wolfe worked as a software developer and Lai worked as a physician in the student health center.

Her experience in family medicine inspired Lai to create SleepPhones. As a family doctor, she was on call every fourth night and frequently received midnight emergency phone calls. When she struggled to fall back to sleep, her husband suggested she try neural beats — sounds designed specifically to promote relaxation and sleep. But regular headphones were bulky and only allowed her to sleep on her back. Earbuds were better, but if you've ever worn them for an extended period of time you know that they can cause pain and discomfort in your ear. So Lai searched for a better solution. That's when she created SleepPhones, a soft fleece headband with flat speakers pocketed inside.

It's a seemingly simple solution, but there was nothing like it. This January, Wired magazine called it one of the "coolest things at CES."

Lai says customers and former patients who tried the product stopped taking sleeping pills once used to cope with insomnia and, in some cases, a snoring spouse.

It's not the kind of product you necessarily think of when someone says it's the unique offering of a "tech startup."

Indeed, at AcousticSheep's headquarters and warehouse in EBCO Park, there are few overt signs of "tech." A handful of employees saddle workstations tackling everything from sales to customer service, to graphic design. SleepPhones and RunPhones are assembled by hand and every box is packaged, packed, and shipped by people working in Erie.

AcousticSheep has ten full-time employees in Erie and an equal number of part-time and seasonal employees that help fill holiday orders and the boost that comes from press like it received during this year's Consumer Electronics Show.

Erie isn't necessarily the place Lai thought her company would end up after launching in State College, but she's glad it did.

"We reached out to the same business resources in State College as we have here, but those were really more focused on the students," Lai says. "People say that Erie isn't keeping up. I think that Erie is really making a good effort. Coming from the State College area, I'd say that Erie has much more to offer. There wasn't anything like the Erie Technology Incubator, which is based at a university, but it's not for students. There's a lot of mentorship going on here — I have a mentorship team and I'm part of a mentorship team."

"The team" seems important to Lai as she talks about the evolution of SleepPhones as a brand and AcousticSheep as a company.

It began with teamwork in her kitchen. From there, Lai and Wolfe hired a team of seamstresses to sew the headbands. When it came time to get serious about product distribution, they looked for someone to join the team and oversee warehouse operations. They struggled to find the right person as well as the right location. That's when they turned to Wolfe's brother, Jeff.

He had experience and he was interested in the opportunity, but he lived in Erie. So AcousticSheep came to him. Now Lai and the Wolfe brothers are at the central command of a company that delivers product to almost every continent.

One wall of the brightly colored, but otherwise modest, office space, a map of the world is dotted with fluorescent stickers marking locations where SleepPhones or RunPhones have shipped.

"We have a few international sales agents, one in the UK that handles Europe and another one based in the UAE that handles the Middle East, Africa, and Asia. He's helping us work on Japan right now. Japan's a tough market to crack," Lai notes. She'd also like to expand into Brazil, but recognizes that as another difficult market to break into.

It's also difficult to get shelf space in major retail outlets, and that's where Lai has focused her attention. SleepPhones sell well online, but according to industry experts, only 20 percent of electronics are purchased online. The other 80 percent are purchased in brick and mortar locations.

As I listened to the AcousticSheep elevator speech, I couldn't help but feel like the tone and tempo were similar to that of a winning pitch on the television show Shark Tank. But when I posed the question of investors to tap into the markets she wants to enter, Lai rejected that notion.

"Whatever we've made in profit we keep reinvesting in the company and we're going to keep growing in that way. We've found our way through the process, asking a lot of questions and not being afraid to ask questions. You think of business as being more cutthroat, but unethical businesses can't survive. It's only the ones that give something of value to the world that are going to make it. As a doctor, I feel like I'm helping more people now than I ever did one-on-one as a family physician."