Basic combat training (BCT) can be a stressful transition for soldiers, both physically and mentally. Perhaps one of the greatest challenges for new recruits is getting accustomed to a new environment in which different practices and schedules are set in place. A strictly regulated sleep schedule is customary in the military, one in which five to six hours per night is considered average for new service members.

In addition to being physically and mentally draining, sleep restriction has many other repercussions, including injury, difficulty concentrating, impaired physical ability, and compromised communication between soldiers. The dangers of sleep deprivation were truly illuminated in a qualitative sleep study by Military Medicine, where it was reported that a soldier fell asleep while firing a weapon.

Insomnia's vicious cycle often begins in BCT and is consistent throughout a soldier's time in the military. Addressing the problems with sleeplessness during these introductory weeks of nonstop drills and exercises will promote better health among service members and ultimately provide optimal preparation for combat.

Insomnia has been regarded as the signature illness of military service, according to U.S. Army Corporal Sean Bedingfield, who led a fire team through northeastern Afghanistan in 2008. This never ending sleepless cycle is linked with other sleep problems, such as nightmares and sleepwalking, and can lead to delusions during periods of wakefulness. For the last decade, the Medical Surveillance Monthly Report, which includes articles from the Armed Forces Health Surveillance Center, has highlighted skyrocketing rates of sleep apnea, a condition which interrupts the breathing cycle during sleep, in addition to insomnia.

Despite specific parameters set between lights out and morning wake up calls and the inherent physical exhaustion from training, soldiers are still experiencing disruption in their circadian rhythms. In fact, according to Military Medicine, military participants reported a three hour reduction in average sleep time from a rough eight to nine hours at home to five to six hours during BCT. The study attributes short sleep to excessive noise in the training environment, uncomfortable sleeping quarters, anxiety and stress, and hunger (evening meal occurs between 4:00-5:00 pm while lights out is at 9:00 pm).

According to a study by Medicine & Science in Sports & Exercise, sleep restriction has been identified as an independent risk factor in persistent psychological distress. Reduction in sleep duration and quality is linked to immediate consequences such as weak mental and physical performance, diminished cognitive control, and impaired interpersonal skills. Research shows that sleep loss during BCT has been associated with long-term side effects such as posttraumatic stress disorder (PTSD), increased levels of depression and anxiety, and suicidal thoughts throughout military populations.

Lack of sleep in basic training is an issue that, if ignored, can extend into active service time. Soldiers can grow increasingly exhausted, making it exceptionally difficult for them to get out of bed every day, let alone overcome the extreme fatigue that has cumulated. A study by The Society of Federal Health Professionals suggests that active duty status can persistently impact nightly sleep for at least a year. Furthermore, the Journal of Psychosomatic Research shows sleep problems continue for veterans into the post-deployment period and can impede the ability to transition back to civilian life.

Getting a Good Night's Sleep

"While sleep deprivation is part of the military culture, the high prevalence of short sleep duration in military personnel with sleep disorders was surprising," said Dr. Vincent Mysliwiec, chief of Pulmonary, Critical Care and Sleep Medicine at Madigan Army Medical Center in an interview with Military.com. "The potential risk of increased accidents as well as long-term clinical consequences of both short sleep duration and a sleep disorder in our population is unknown."

Historically, military culture has put the importance of sleep on the back burner. In fact, a study by the RAND Corporation confirmed no evidence-based practices to prevent sleep disorders in the military.

A delayed sleep regimen, while unorthodox for the military, could have compelling benefits for soldiers. A study at Fort Leonard Wood, MO compared a company on a delayed sleep schedule (11:00 pm-7:00 am) to a standard basic training sleep schedule (8:30 pm-4:30 am) and found soldiers on the delayed regimen reported better sleep duration and quality as well as improvement in mood.

For standard BCT sleep schedules, natural remedies such as melatonin supplements can help to regulate sleep and wake cycles and ease insomnia. Use aromatherapy with a few drops of lavender on your pillow, as this essential oil is known to have a calming effect on the mind and body. Additionally, relaxing music or white noise can help block out noisy disruptions like snoring or drills. SleepPhones from AcousticSheep use clinically-proven sound technology and double as an eye mask to ensure a full night's rest.

With risks like decreased cognition, psychological distress, and even physical dangers, it's no question that sleep is a necessary component in a service member's day. Increased military education about healthy sleep behaviors can increase knowledge and awareness about the adverse factors of sleep deprivation and encourage relaxed rest. 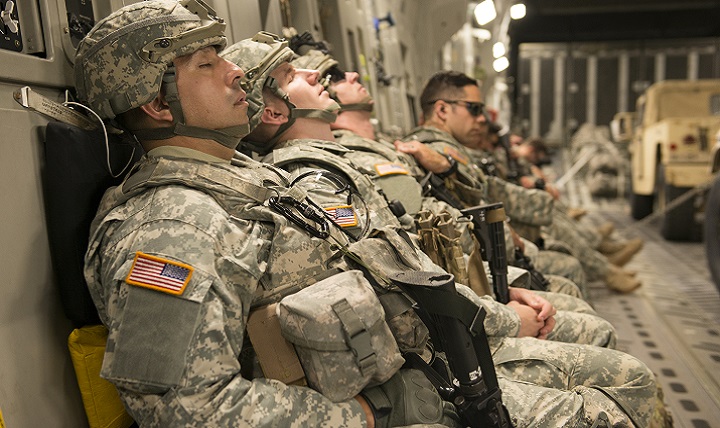